Over the last few projects I've been working on, I started to notice that clients are requiring increased integration with social platforms that give them the ability to display key elements from well known social platforms, such as YouTube, Twitter and Instagram. Hence the reason why in the past I created a YouTube Form Control that would easily retrieve all information information about a video along with their screen caps by simply entering the YouTube URL.

Recently, I've been working on two more form controls involving Twitter and Instagram to further enhance social platform integration within Kentico from a user standpoint, which (I think) is quite neat!

Using a combination of OAuth and Twitter'sGET statuses/show/:id API endpoint, I was able to store within Kentico all JSON data relating to a tweet by just entering the ID. One major advantage to storing JSON data is that we can display the tweet as many times as we want throughout the site without worrying about breaching API limits.

In addition, individual elements of a tweet, such as the embedded image, hash tags and author information can be used when required. 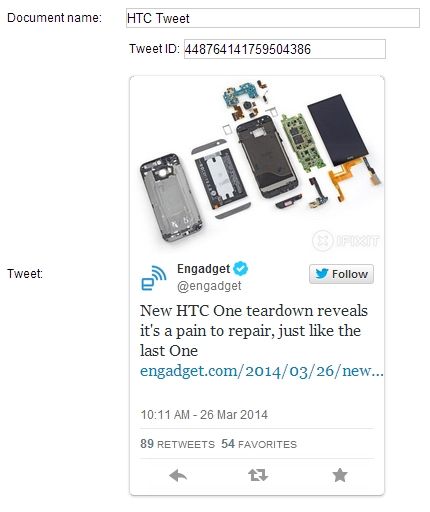 As you can see (above), I am using Twitter's Embedded Tweet plugin to display the tweet in a nice graphical representation so that the site administrator is able to view contents of the tweet prior to publishing live.

Like the Twitter control above, details of an Instagram image is retrieved in a similar fashion, whereby I'm storing all the details in JSON format.  In this case, I'm using a combination of two Instagram API endpoint's:

Unlike Twitter, Instagram's API is a breeze to implement. There are no API limits (at time of writing) and all you need to access the endpoints is to generate a one time only access token. 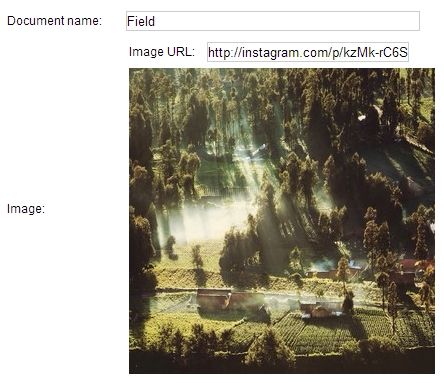 By copying and pasting the link of an Instagram image will return all object information and display the image/video within CMS Desk.

I will at some point write a blog post on how I created these two controls once I have refactored all the code into one single control. At the moment, some key functionality is segregated into separate class libraries.

Ever since Twitter ditched version 1 of their API to version 1.1, an additional hurdle created when attempting to get any data from Twitter. Authentication (using OAuth) is now required on all API request endpoints. I can see why Twitter decided to go down this route but it does add a little headache when carrying out the most simplest requests.

I came across a really simple and expandable class library called OAuthTwitterWrapper that stemmed from a StackOverflow question I found. Out-of-the-box, this library contains calls required to retrieve a user's timeline and return searches which is great to get you up and running quickly.

The OAuthTwitterWrapper provided me a really good basis to add further Twitter features, for example a list of users favourite tweets.

If you don't plan on doing anything too complex when interacting with the Twitter API, third party libraries such as TweetSharp will meet your everyday needs. However, if you want more control over how you make requests, the OAuthTwitterWrapper provides a good foundation.

During the latter-end of 2010, Twitter overhauled their somewhat simplistic website to compete with client-side offerings (e.g. TweetDeck, Seesmic). What I found really impressive was a hidden bit of functionality that allowed the user to navigate around the site using keyboard shortcuts (or hot keys). If you haven't tried it, take a look at the list of shortcuts below and try them out.

Some people I know in the industry think it's a pointless feature. But I believe something so simple automatically enhances the users experience when accessing a site. In fact, you could think of hotkeys as an additional web accessibility requirement for those who don’t have a mouse or just prefer the more direct approach in navigating through a site. Many sites have been utilising hotkeys to get their sites to act like locally installed software programmes, for example Google Docs.

I was very keen on replicating hotkey functionality on my next project. Not surprising, there are a lot of custom jQuery plugins that allowed you to implement some basic keyboard shortcut functionality. The best one I found through trial and error is Mousetrap. I found Mousetrap to be the most flexible plugin to fire your own custom JavaScript events by binding a single, sequence or combination key press.

Using Mousetrap, I could replicate a simple Twitter-style shortcut to take a user back to the homepage by pressing the following keys in sequence: “G H”:

When I first heard Google were introducing their own social-networking platform, I was intrigued to say the least on what they could offer compared to the other social sites I use: Facebook and Twitter.

As I stated in one of my earlier posts, I am more of a tweeter since I can share my blog posts easily along with my random ramblings. I think Facebook will have a problem competing alongside Twitter or Google+. Facebook is seen to be more of a personal social network rather than a open professional network and that’s its biggest downfall. It’s quite difficult to cross the boundaries between posting professional/business content alongside personal posts. Thankfully, this is something Google Plus does quite well through its new “circle’s” feature allowing complete control on who see’s what.

I jumped at the chance of using Google Plus when I was offered an invite during the initial release. I was very impressed. Simple and straight-forward. My posts looked really beautiful within its minimalist user interface. Well what else would you expect from Google? Don’t get me started on the eye-sore that is Facebook’s new interface – I’ll leave that for another blog post.

For a new social networking site, I get a higher click-through-rate to my blog than I ever got compared to tweeting on Twitter. In the process, I managed to get more people adding me to their circle. So take any remarks regarding the inactivity of Google+ with a pinch of salt. I don’t buy it. Google encompasses a big community that you feel part of.

I briefly touched upon the interoperability factor with Google search. People underestimate the power of having the backing of Google search. For example, what if you wrote an article and linked it to your Google+ profile? This information will be displayed as author information within search results to help users discover great content and learn more about the person who wrote the article.

One thing that did surprise me is the fact that at this point in time there’s no advertisement. Unlike its predecessors (yes I that’s how confident I am in Google Plus), you always manage to find advertisement in some form or another. I can view my profile page without constantly having an advert rubbing my single relationship status to my face – something Facebook does far too often.

I trust Google more with my data over Facebook any day. I know Google can’t exactly be trusted either but unlike Facebook they’re not always in the the news on a monthly basis regarding some type of data scandal. At time of writing, it is being reported Facebook is now facing a privacy suit over internet tracking.

In conclusion, integrating ones self into Google Plus is definitely worth it. I only recently started to make more of an effort on Google+ and I find myself posting my content here over other social-networking sites. The key to making a good start is to make some of your posts public to show others your interests and even connect to these type of people either by adding them to a circle or joining a hangout.