I have created a helper class that will allow me to consume any XML or JSON request for deserialization into a class object. As you can see from the code below, the GetJsonRequest() and GetXmlRequest() methods allow you to pass an unknown type as well as the URL to where you are getting your request from. This makes things very straight-forward when you want to easily strongly type the data.

The ApiWebRequestHelper class relies on the following namespaces:

The ApiWebRequestHelper can be used in the following way:

Today, I stumbled across a really neat feature in Visual Studio 2015 that gives you the ability to create a strongly-typed C# class directly into your class library. I'm amazed that I've happened to overlook this key feature since Visual Studio 2012!

In the past, when consuming large JSON data-structures, I normally head off to http://json2csharp.com to help me get the initial class objects generated, which works a treat. I've blogged about my experiences using json2csharp here.

The strongly-type class generator feature is hidden away in a place I would never have thought to look - Edit > Paste Special, where you will be given the option to either generate a class object based on XML or JSON. But it's in there for a reason. 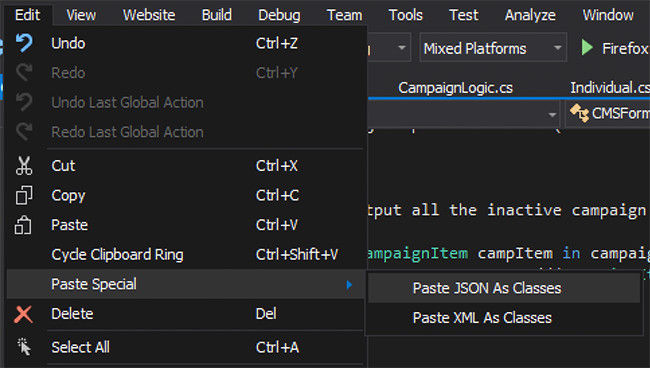 All that needs to be done now is to either copy some XML or JSON ready to paste into a newly created class. I do find the generated output quite untidy, but this is a great starting point to generating complex data structures.

In nearly all my previous projects I've worked on required some kind of manipulation with reading some form of JSON data.

To allow better integration into my application, I always create strongly-typed classes that mirror the structure of the incoming data feed. This in turn allows me to serialize the JSON and select specific properties I require. But sometimes, its quite difficult and confusing to the exact class structure right, especially when the JSON contains lots of fields of data.

When I find this is the case, I use json2csharp.com. By simply pasting the contents of your JSON, the site does all the hard work and creates all the strongly-typed classes for you.