This site has been longing for an overhaul, both visually and especially behind the scenes. As you most likely have noticed, nothing has changed visually at this point in time - still using the home-cooked "Surinder theme". This should suffice in the meantime as it currently meets my basic requirements:

However, behind the scenes is a different story altogether and this is where I believe matters most. Afterall, half of web users expect a site to load in 2 seconds or less and they tend to abandon a site that isn’t loaded within 3 seconds. Damning statistics!

The last time I overhauled the site was back in 2014 where I took a more substantial step form to current standards. What has changed since then? I have upgraded to Kentico 10, but this time using ASP.NET Web Forms over MVC.

Using ASP.NET Web Form approach over MVC was very difficult decision for me. Felt like I was taking a backwards step in making my site better. I'm the kind of developer who gets a kick out of nice clean code output. MVC fulfils this requirement. Unfortunately, new development approach for building MVC sites from Kentico 9 onwards will not work under a free license.

The need to use Kentico as a platform was too great, even after toying with the idea of moving to a different platform altogether. I love having the flexibility to customise my website to my hearts content. So I had to the option to either refit my site in Kentico 10 or Kentico Cloud. In the end, I chose Kentico 10. I will be writing in another post why I didn't opt for the latter. I'm still a major advocate of Kentico Cloud and started using it on other projects.

The developers at Kentico weren't lying when they said that Kentico 10 is "better, stronger, faster". It really is! I no longer get the spinning loader for obscene duration of time whilst opening popups in the administration interface or lengthy startup times when the application has to restart.

Upgrading from Kentico 8.0 to 10 alone was a great start. I have taken some additional steps to keep my site clean as possible:

I basically carried out the recommendations on optimising website performance and then some! My cache statatics have never been so high! 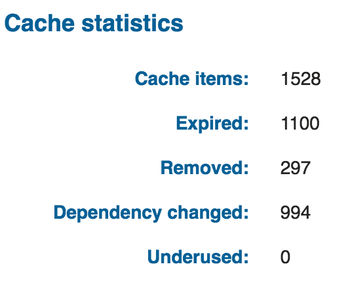 One slight improvement (been a long time coming) is better open graph support when sharing pages on Facebook and Twitter. Now my links look pretty within a tweet.

I've been a .NET Developer for around 6 years and it still amazes me how I can overlook something that I never really questioned. For example, when a user control is hidden, I always assumed that all the code it contained would never run since until it was made visible.

However, after being told by one of my work colleagues that in fact a hidden user control will always run, it will just simply is hidden by the client. After searching the web for a definitive answer, I found a StackOverflow post that fully backed up his theory: http://stackoverflow.com/questions/12143693/hiding-user-controls-using-code-behind-does-internal-code-still-run-ie-am-i.

As the StackOverflow post suggests, the most performance efficient way to show/hide a user control is by dynamically loading it in when required.

As you can see in my example above, I'm loading my user control to a place holder in the page.