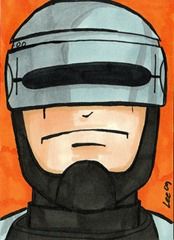 Apologies for making a reference from the social-satire/sci-fi film that is RoboCop (1987) in my post title. It just had to be done when talking about some tool called RoboCopy. For those who aren’t aware of what RoboCopy is, where have you been? In all honesty, I myself never heard of it until a few days ago.

RoboCopy is a command-line run tool that allows you to copy files from one directory to another. One of its most popular uses for RoboCopy is it’s ability to copy large volumes of files quicker than carrying out a manual copy and paste through a GUI, making it ideal for backup jobs. So you could easily write a backup script to run via a Schedule Task on a daily basis.

I managed to backup around 80Gb of files in less than an hour. What’s even more impressive is that I could run numerous RoboCopy scripts at the same time. Currently, I have only run two scripts simultaneously just to be on the safe side.

Prior to RoboCopy, I was using another command-line tool: XCopy. For my backup purposes XCopy did exactly what I wanted it to do until I came across a misleading error message: “Insufficient memory”. You would think this message would mean the destination directory to where your files are copying to is full or not enough memory resources. In matter of fact this error only happens when the fully qualified file path is longer than 254 characters. Unfortunately, I couldn’t get around this error due to the nature of how my directories are structured. Luckily, RoboCopy doesn’t have this limitation.

One of the major strength’s of RoboCopy is the number of useful options you have at your disposal. A few example’s are:

The script I have provided is what I use to backup files through a Schedule Task that runs at the end of every day. This script mirrors the source drive exactly. So any files that have been deleted, updated or created will have the same effect on the backup drive. In addition, a log file is created when RoboCopy is running.