I recently blogged about a very large Kentico E-commerce build I was involved with at Syndicut that contained around 2 million products. Trust me, this is a major feat in itself! A lot of customisation and performance improvements were made to the Kentico build to accomodate the sheer volume of products.

A follow up post will be published soon that will detail the issues we experienced in developing a Kentico site that has to manage more products you could ever imagine and our solution to those issues.

You can have a read about the project and some of my highlights here: https://medium.com/syndicutstudio/welcome-to-our-biggest-kentico-e-commerce-build-yet-9bd2109955e0.

A website can tell the public a lot about you, from the things you want people to see and other things you probably would not. HTTP Headers can divulge things about your website that you wouldn't necessarily want to make public and its up to the individual to make a decision on what headers they're willing to expose. But what I would recommend is to at least analyse any site prior to moving to a production environment.

Why all of a sudden am I talking about questioning your website HTTP Headers?

It was only by chance when perusing StackOverflow I came across a question about securing HTTP headers, I was directed to a site called securityheaders.io. I immediately entered this very site for scanning, thinking it would fare quite well. But boy oh boy was I wrong!:

Based on this result, does this make my website vulnerable? To a certain extent yes. By default you're exposing some key information to potential hackers about how your website is built. For example, here is a simple list of HTTP Headers that could be returned from the server:

Now based on that list alone, what HTTP headers would you hide? From having my eyes opened by the report generated by securityheaders.io, as a minimum I would hide anything that shows what technology, framework and server platform I am using. If there happens to be an exploit on the very server or technology you are using, we don't want the whole world to know that especially if you happen to be hosting a high traffic website.

I decided to correct all the issues highlighted by securityheaders.io and spent additional time obfuscating some additional headers. Now I can proudly say I've passed. There is just one blemish against the report to do with the "Content-Security-Policy" header, which defines approved sources of content that the browser may load.

I been tweaking around with the rules for this header and I'll be honest when I say it shafted the administration dashboard of my the content management system I use for my site - Kentico CMS. So before I reinstate the header, I need a little more time tweaking.

Another great site to use to analyse the security of your site (.NET sites only) is ASafaWeb, which scans for common configuration vulnerabilities.

Whilst making a request to one of my API endpoints for an iOS application, I came across a very unhelpful error: "Invalid response for blob". I couldn't really understand why React Native was complaining about this single API endpoint, since all my other endpoints did not encounter this error. 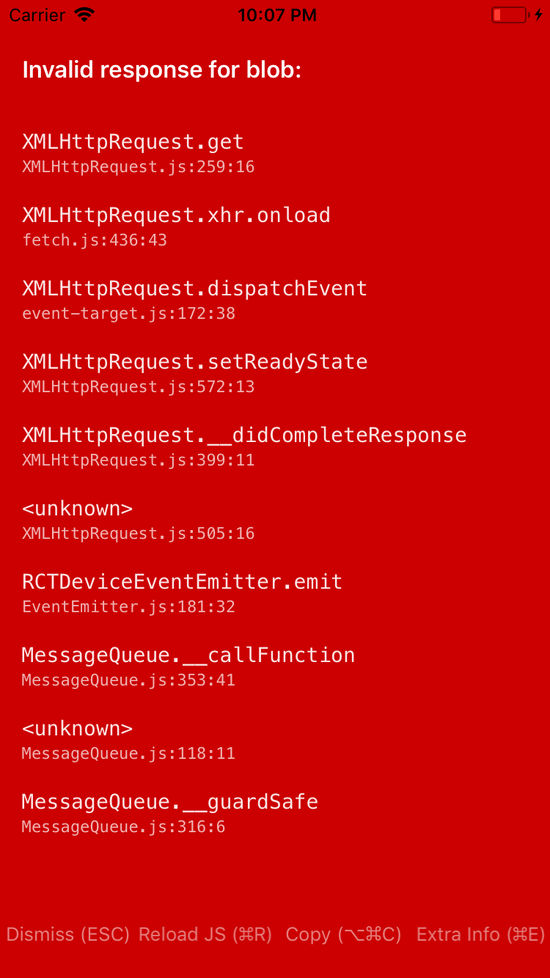 The API endpoint in question is a pretty simple email address validator. If the users email address is unique and passes all verification checks, the endpoint will either return a 200 (OK) or 400 (Bad Request) along with a response containing the error. For those who understand ASP.NET Web API development, my endpoint is as follows:

Weirdly enough the "Invalid response for blob" issue did not occur within my endpoint when the users email address did not pass the required checks, thus returning a 400 error and a response detailing the error. It was only when a 200 response was returned without a value.

There seems to be a bug in the React Native environment when it comes to dealing with empty API responses. The only way I could get around this, is to always ensure all my API endpoints returned some form of response. Very strange! I suggest all you fellow React Native developers do the same until a fix is put in place.

The issue has already been logged so I will be keeping an eye on a release for a fix.

I wasn't too sure to whether anything had been done in regards to the fix since writing this post as there was no update to the Github issue that was first logged on the 5th March. So I decided to share this very post to a React Native group on Reddit to get some form of answer. Within a short period of time, I was told this issue has been fixed in React Native version 0.56.

Earlier this week a post I wrote for C# Corner was published. It was about an alternative to use the very well known SQL Server "IN" condition when working with many values. I discuss storing a list of values you would normally pass directly into your "IN" condition for querying to a User Defined Data Type.

There will probably be a very small number of cases where additional steps I write in the post will need to be carried out. Afterall, SQL Server has a very large limit on the number of values the “IN” condition can handle, based on the length of instruction (max 65k).

Check it out here: http://www.c-sharpcorner.com/blogs/alternative-to-sql-in-condition-when-working-with-many-values