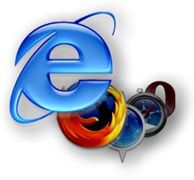 We have been using Cascading Style Sheets for many years now and it has been a god send to help break us away from table based layouts and create an aesthetically pleasing site. I was quite surprised to find out that the CSS 2.1 standard has been around for 11 years. We have moved on considerably over this duration of time and even though some recent browsers are adopting CSS3 already, why do we continue to use CSS2.1?

The only answer to this question I can think of is due to the continued use of legacy browsers such as IE6. If we look at the current browser trends (below), the amount of IE6 users have decreased over the year from 18.5% to 14.4%. So this is a decrease by around 4%, which is good but not great.

Looking back at all the sites I have created over the year, I still find myself applying workarounds to give IE6 and current browsers the same viewing experience. So 14.4% of IE6 users still has a major impact on general web design.

Generally, companies are probably to blame for the continued use of IE6. Big companies are sometimes slow to change and especially if using the web is not at the business core they don’t see any reason to move forward. In addition, they see IE6 as a more secure browser.

Can I see a final nail in the IE6 coffin sometime in the future? Unfortunately, No. Microsoft have extended their support for IE6 to 2014. So for now IE6 users still have 5 years to upgrade. Lets just hope Microsoft doesn’t make the same mistake and renew IE6 support for another 5 years after 2014!

We as users of the Internet need to move with the time. If we don’t, sites will continue to be restricted to the confines of yesteryear which is no good to anybody. Legacy browsers such as IE6 need to be phased out via end of life programmes and allow newer browsers to flourish.